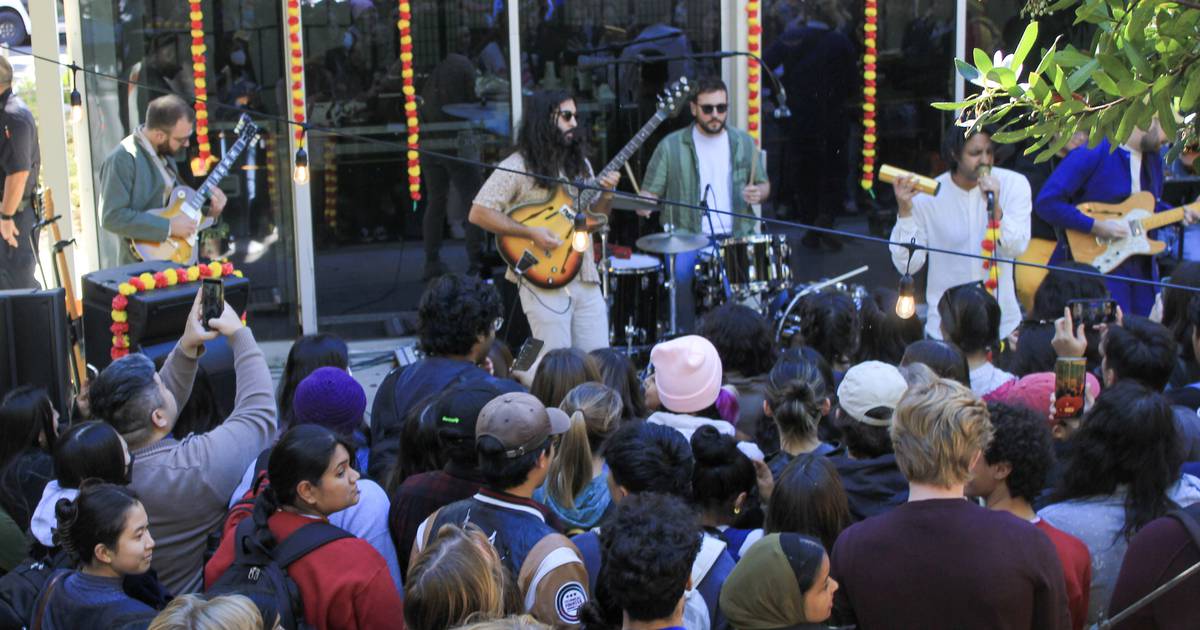 Varun Soni, the dean of religious life at USC, asked the group Young the Giant to surprise USC students on Wednesday afternoon with an impromptu concert at the University’s Religious Center, also known as from URC.

Young the Giant is an American rock band with two Billboard top 10 albums and over five million monthly listeners on Spotify.

This is not the first time that Sameer Gadhia, singer and co-founder of the group, has performed at USC.

“When we started as a band, we always came to USC and just played random pop-up shows,” Gadhia said. “Let’s just go back to our roots.”

Sameer also visited USC twice in 2020: once to perform and another time to speak to students with the band at the Bovard Auditorium, where Soni and Gadhia first met.

“They came to USC to do a panel discussion on some of the themes from their albums, which deal with migration, identity and belonging. And I really admired how deep they were,” Soni said of her inspiration for hosting the concert. “We all lived in Venice, and I got to know them over the years and became a big fan.”

The world-famous rock band found themselves in one of USC’s most intimate venues on Wednesday afternoon, performing on the steps of a building where students pray and worship. The group recently released their American Bollywood album, which deals with themes of immigration and spirituality, making the center a fitting venue for their performance.

Most of the students congregated at URC, stopping by the pop-up concert to enjoy the music. Other students even became part of the music.

“I think I’m still processing. I think I’m in shock,” said Belle Wang, a senior who was invited to play viola with Young the Giant. “To always hear an artist’s music and finally be able to perform with them, especially in front of a live audience, I think is something I never thought I would do today.”

The band needed string instruments for their show and invited a quartet of USC performance students to play with them at the last minute. They rehearsed together for the first time before the performance, much to the delight of the student-performers who are all long-time fans of the group.

“It was amazing. We were sitting there, we were playing, our arms were swinging. We were just in the swing of the song,” said Evan Ilafet, a senior violin specialist who performed on Wednesday. “We were vibrating, we A little scratch here, a little miss there, but that’s okay. You know, it’s not classical music. It’s not Schubert. It’s Young the Giant.

Ilafet’s enthusiasm was shared by many of the band’s fans, many of whom grew up with Young the Giant’s ever-evolving styles.

“They started in high school. Like their first song was ‘My Body’, it’s a fun high school, college-like fraternity song,” Soni said. “But now, 13 years later, they’re singing about migration, memory, family history, spirituality. Those are really deep themes that the band itself grew up in. They’re not in high school anymore; they’re in their early thirties. They have kids, right? So they’re growing in their art as they grow in life and they bring their audience with them.

These themes of growth and the search for identity in America are also based on the question of media representation in America.

Soni said that for American Indians there was a dearth of Indian role models in the media “other than Deepak Chopra and Apu from ‘The Simpsons’.”

Thanks to Sameer, Soni said her children can now aspire to be “rock stars”.

“Nothing is more American than rock ‘n’ roll,” Soni said.