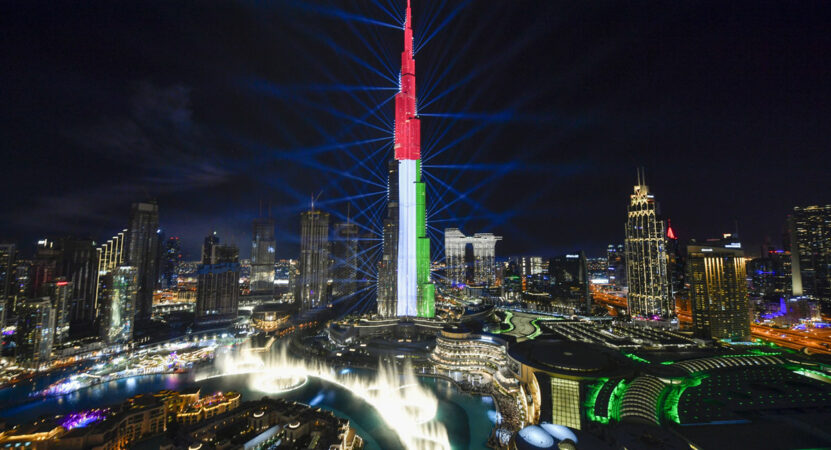 The religious harmony behind the growth of the UAE

Jeddah: The United Arab Emirates is known for its skyscrapers, including the imposing Burj Khalifa. The country’s official religion is Islam, but it attracts more than 200 different nationalities from different religious and ethnic backgrounds and Indians are among the largest chunks of this population.

This country was formed on the principles of tolerance, spirituality and open-mindedness that accommodate multi-faith people from various parts of the world. The UAE has experienced a new nation-building process that has highlighted the need to “instill tolerance in the Emirati national consciousness” and “forge tolerant future generations among the country’s youth”. Tolerance is a key tool for the success of vibrant economies and prosperous nations.

Not only crude oil but also the principle of tolerance attributed to the rapid growth where every day dozens of Indians choose to work and live. Around 35 lakh Indians live in the UAE while another 20 lakh visit annually for business, leisure and family purposes. Indians constitute about 27% of the total population of the United Arab Emirates.

The Hindu Temple in Dubai, commonly known as the Shiva and Krishna Temple, was built in 1958 next to a mosque. As the existing building is unable to cater to the growing number of worshippers, the government of Dubai allocated land for Jebel Ali and construction of a new temple began in 2020. Due to open on the day of the Dussera festival , the main deity of the temple will be Shiva on the central podium with 14 idols including Sri Venkateshwara Swamy.

“We are confident to celebrate Sri Sri Srinvasa Kalyana Mahotsavam next year at the new Jebel Ali Temple,” says K. Sudarshan, who has successfully organized Sri Venkateshawara Swamy’s Heavenly Wedding for 10 years in Dubai. The new temple is located in a district dedicated to places of worship and shares a perimeter wall with a Sikh gurdwara and two Christian churches are across the road.

The upcoming BAPS Hindu Mandir in Abu Dhabi is another indicator of the UAE’s religious tolerance. The temple is being built on 13.5 acres of land donated by Shaikh Mohammed bin Zayed Al Nahyan, Crown Prince of Abu Dhabi. An additional 13 acres of land was also donated for the establishment of parking lots for the temple. In addition, the Abu Dhabi government leased 10 acres of land for four years for the storage of temple building materials.

The Abu Dhabi government has also allowed the BAPS Temple Trust to seek donations, which is rare in the region. Another classic example of harmony in the country is Dubai’s Guru Nanak Darbar Gurdwara. Spread over a 25,400 square foot plot donated by the ruler of Dubai Shaikh Mohammed Bin Rashed Al Maktoum to Jebel Ali, the Gurdwara kitchen (langar) feeds an average of 1,500 people on normal days and up to 50,000 on special days. There is another Gurdwara in Abu Dhabi which has not yet been granted permission.

The churches have been serving the faithful since the 1960s in the country. There are 40 functioning churches in the country. St. Mary’s Catholic Church in Dubai is the oldest. The current ruler’s father, Shaikh Rashed bin Al Maktoum, not only donated the land, but himself laid the foundation stone for the construction of the church in 1966.

With more and more migrant workers from southern states, the CSI church was established in 1975. Telugu church service has been active in the UAE for decades. There are now over a dozen Telugu Christian congregations and Dubai’s Holy Trinity Church Service is one of the most popular. The UAE is also home to a synagogue, a Jewish place of worship and regularly hosts the Shabbat holiday.

To further promote its diverse inter-religious culture, the UAE has begun construction of The Abrahamic Family House, a religious complex that will house a mosque, synagogue and church, and is currently under construction on Saadiyat Island, Abu Dhabi. .

Named after Abraham – the common patriarch of Christianity, Judaism and Islam – this historic interfaith complex is the first of its kind in the region. The UAE has zero tolerance towards hatred and discrimination. Under the law, any act that triggers religious hatred through any form of expression that covers speech and writing, books, pamphlets or online media is prohibited. Some Indians who posted or shared Indian posts on social media have lost their jobs.

You can now get handpicked stories from Telangana today on Telegram every day. Click the link to subscribe.