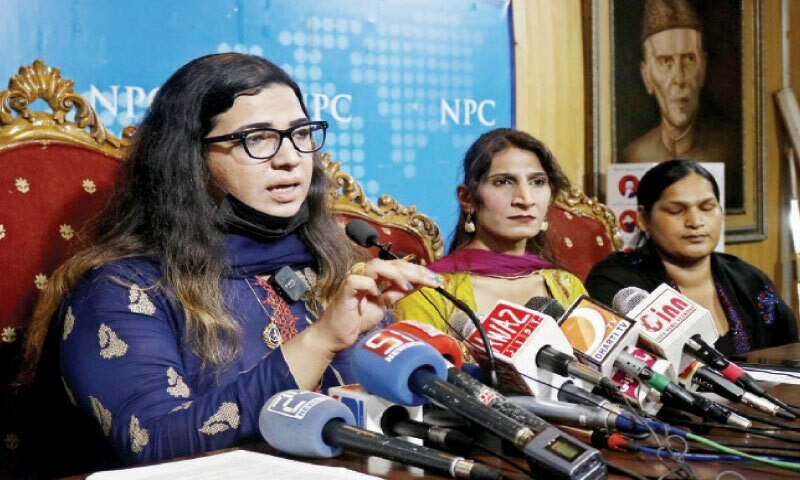 ISLAMABAD: The transgender community on Friday criticized religious elements in the country who oppose the Transgender Persons (Protection of Rights) Act (2018).

The Parliament of Pakistan approved the Transgender Persons (Protection of Rights) Act in May 2018, which included the support of all political parties in Pakistan.

However, almost all prominent religious political groups opposed the law which was already enacted in 2018 under the PTI-led government.

The Transgender Persons (Protection of Rights) Bill 2018 has passed the National Assembly and Senate with the endorsement of all major political parties in Parliament.

However, the current controversy related to the law emerged after Senator Mushtaq Ahmad of Jamaat-i-Islami (JI) submitted amendments to the law and even challenged the law in the Federal Shariah Court (FSC). He believes that this bill was an attempt to legally protect homosexuality in the country. Meanwhile, Nayab Ali criticized religious groups and said that assumption was incorrect.

“Such a law was necessary because we too are citizens of this state – and it entitles us to equal rights to education, health facilities, transgender identity on our identity cards, passports which would allow us to own property and businesses,” Ms. Ali said, adding, “These rights will allow us to opt for a decent life instead of just being second-class entertainers.”

The transgender community, however, claims that false propaganda has been launched against the Transgender Protection Act, complaining that labeling those who fight for equal rights for transgender people as “gay” is tantamount to committing cruelty to against them.

Speakers said the assumption against the law which implied that it promotes “same-sex marriage” was absolutely wrong as it is illegal under Pakistani law anyway.

“I would advise critics of the law to read it first because the law was based on medical grounds, in addition the law was finalized after parliamentarians considered cultural and religious grounds in this regard as well,” said Nayab, adding that extremist minorities in Pakistani society were trying to challenge the law which was enacted after the collective wisdom as well as the will of the majority of this country.

“I am sure that the attempt to show that this law was un-Islamic will be denied in the Federal Sharia Court as they will not find any of their arguments credible,” Nayab said.

Although there are several serious oppositions to the law from some groups, Majlis Wahdat i Muslimeen Allama leader Nasir Abbas said Friday that transgender people are a respectable part of society and should have rights fundamentals available to all other men and women in the country.

“But we need to make the necessary changes to section 3 of the Transgender Protection Act 2018 because the law says a person must determine their gender identity according to their imagination and will,” said he said, adding: “This could lead to inappropriate behavior in society.

While Maulana Fazlur Rahman, head of the Jamiat Ulema-i-Islam-Fazl (JUI-F) said the law is against the teachings of Holy Quran and Sunnah and added that he would submit amendments to Parliament.

Incidentally, Senator Mohsin Aziz of the PTI also voiced his opposition to the law and even claimed that it was approved when his party was in power due to a lack of awareness of the issue.

He too introduced amendments against the law, but added that the transgender community should be granted their rights as equal citizens.