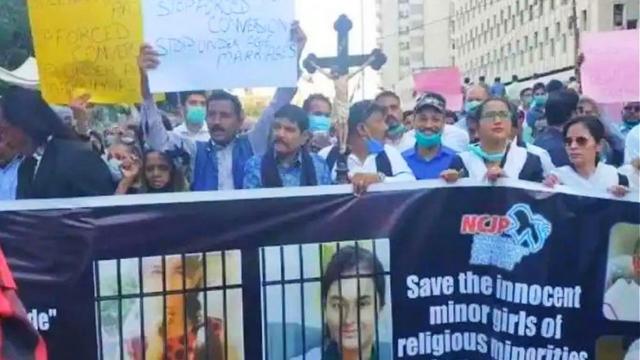 It’s a bad August for Pakistan. As reported by Bitter Winter, Punjab’s new chief minister has come under heavy international criticism for escalating the persecution of Ahmadis in his province. Visa trafficking charges against a senior Pakistani diplomat, former Ambassador to the Czech Republic Israr Husain, pointed to the presence of human trafficking and corruption at the highest levels of the Pakistani bureaucracy. Meanwhile, in the United States, a detailed report from USCIRFthe United States Commission on International Religious Freedom, has accused the Pakistani government of finding that the religious freedom situation is going from bad to worse.

The report notes that Islam is the state religion in Pakistan. The constitution reserves a small number of seats in national and some provincial assemblies for religious minorities but, by a perverse mechanism, Ahmadis, who are among the most persecuted minority, are in practice not allowed to vote.

The USCIRF report reviews laws punishing blasphemy with the death penalty. It notes that “those accused of blasphemy risk violence, imprisonment with limited possibility of bail, and even the death penalty, although no convicts of blasphemy have been executed by the state in Pakistan. Even if he is acquitted by

in court, the accused and his family are often ostracized or expelled from the community and face continued aggression. Simple allegations of blasphemy are enough to provoke riots and the murder of the accused by armed assailants or vigilante groups. Blasphemy laws are also used to accomplish personal vendettas.

The fact that to date no death sentence for blasphemy has been carried out is counterbalanced by the sad observation that “many of those who are indicted or simply accused of blasphemy are killed by vigilante groups or in assassinations targeted”. Obtaining justice from the court against those who were part of the lynching mobs is not easy.

The report mentions the case reported by Bitter Winter in December 2021 of a Sri Lankan executive accused of blasphemy and lynched by a mob who burned his body. He also mentions the horrific case that happened in “February 2022, [when] an angry mob stoned to death Muhammad Mushtaq, a mental patient accused of burning the Quran, in Khanewal district, Punjab province. Officers at the scene were also injured as they attempted to take the accused into custody. The crowd of some 300 people then hung his body from a tree. Videos shared on social media showed a large crowd gathered at the site.

Christians, Sikhs and Ahmadis have also been killed in sectarian hate crimes without any charges of blasphemy. Laws prohibiting Ahmadis from calling themselves Muslims are increasingly being enforced. Ahmadis’ use of any symbol that can be constructed as Muslim is enough to arrest them, vandalize their places of worship, and even their graves.

Christians and Hindus report that forced conversions and abductions of girls from minority religions who are then ‘converted’ to Islam and married to Muslim men are on the rise. Courts often side with the perpetrators and say the conversions were voluntary.

The report also notes the rise of xenophobic and fundamentalist Sunni Muslim political organizations, including Tehreek-e-Labbaik Pakistan, which target Shia Muslims as heretics.

The report concludes that, notwithstanding Pakistan’s promises to improve its human rights record, the religious freedom situation has, to say the least, deteriorated and religious minorities remain in a ‘disastrous’ situation. . “The existence and enforcement of blasphemy laws and anti-Ahmadiyya laws facilitate Islamist extremist elements and support their narrative that leaves little room for religious inclusion. Pakistani laws also fail to protect religious minorities who are at increasing risk of kidnapping, forced marriage and forced conversion to Islam. “As the U.S. government continues to engage with Pakistan, USCIRF notes, it should continue to raise religious freedom concerns and ensure the protection of religious communities targeted by Pakistan’s problematic laws and extremist groups.”