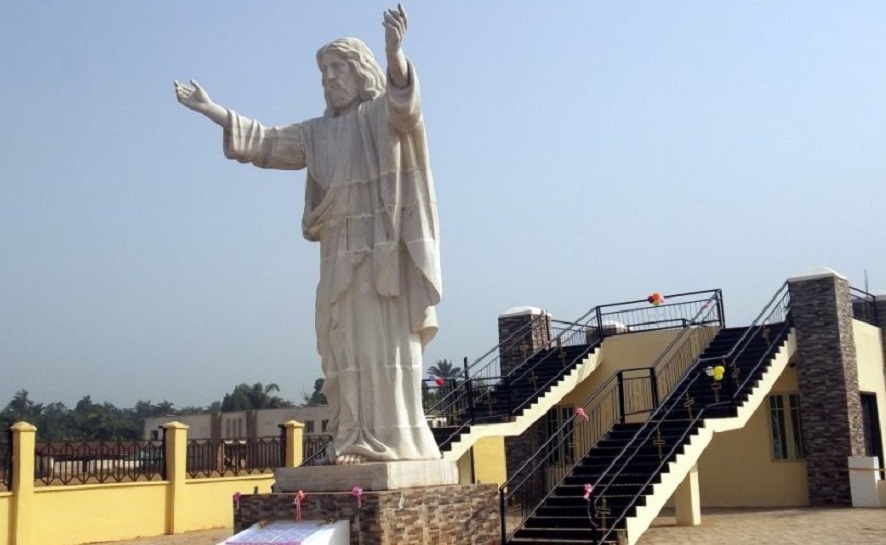 It is nine meters high and carved in marble, and considered the largest statue of Jesus in Africa. The ‘Jesus De Greatest’ statue is also the tallest statue of Jesus on the African continent, standing almost 28 feet tall in the village of Abajah in southern Nigeria.

It closely follows the Christ the Redeemer statue in Rio de Janeiro which is 98 feet tall and the tallest Christ the King in western Poland which is 118 feet tall,

Devout Catholic businessman Obinna Onuoha, who commissioned the construction of the statue, said the project was to fulfill a personal promise he made to God in 1997.

According to Aleteia, a Catholic news portal, Obinna said he wanted the building to be seen as a symbol of peace in a country struggling against Islamic extremist groups like Boko Haram. He also observed that since 2009 Nigeria has faced attacks from extremists in the northeast of the country and believes the statue of Jesus will send a signal that Christians and Muslims can coexist peacefully.

The Christian community has remained resolute despite the Boko Haram insurgency which has claimed the lives of at least 20,000 people in recent years.

Nigeria is Africa’s most populous country with over 170 million people who are predominantly Christian and Muslim.

Researcher Tony Terwase Famave, in his article on “Fostering Dialogue and Engagement: The Role of Catholics,” noted that ethnic and religious divisions in Nigeria have often been complicated by Muslim and Christian communities.

According to him, the general culture of the traditional sect before the arrival of Islam and Christianity was one of tolerance and acceptance. But, evangelism by the two dominant religions has been the trigger for the current religious conflicts in Nigeria.

Tony said the religious conflict could be traced to colonialism, as Muslims perceived Christians as enjoying the protection of the British. Muslims viewed the British conquest of northern Nigerian territory as a victory for Christianity.

Citing a letter written by Lord Lugard to the Caliphate announcing the British’s intention to maintain good relations with Sokoto, Tony said this further strained the perspective of Muslims as it was seen as an attempt to antagonize the Sultan. Abdurranhman Atiku and take over their land.

This explains why the chiefs, emirs and Islamic communities of these regions were hostile to Christian missionaries, so much so that they all together had to suspend missionary activities there and demand that they leave the territories between 1886 and 1902.

He added that even till today churches are easily burnt down in the north at the slightest misunderstanding or miscommunication in the media. State governors rarely grant permission to build churches, and in most cities it is forbidden to build churches.

Tony Famave further indicated that although Nigeria has been considered a secular state since its independence in 1960, religion still plays a huge role in the daily life of the nation.

He pointed out that the mixture of politics and religion in Nigeria has cost the country so many lives and caused Nigerians to have a distorted view of what true religion is.

It is in this context that the initiative of businessman Obinna Onuoha using the statue of Jesus De Greatest is significant in promoting religious tolerance and mutual respect in Nigeria.

Live and Let Die: Reflections on the Non-Religious Right