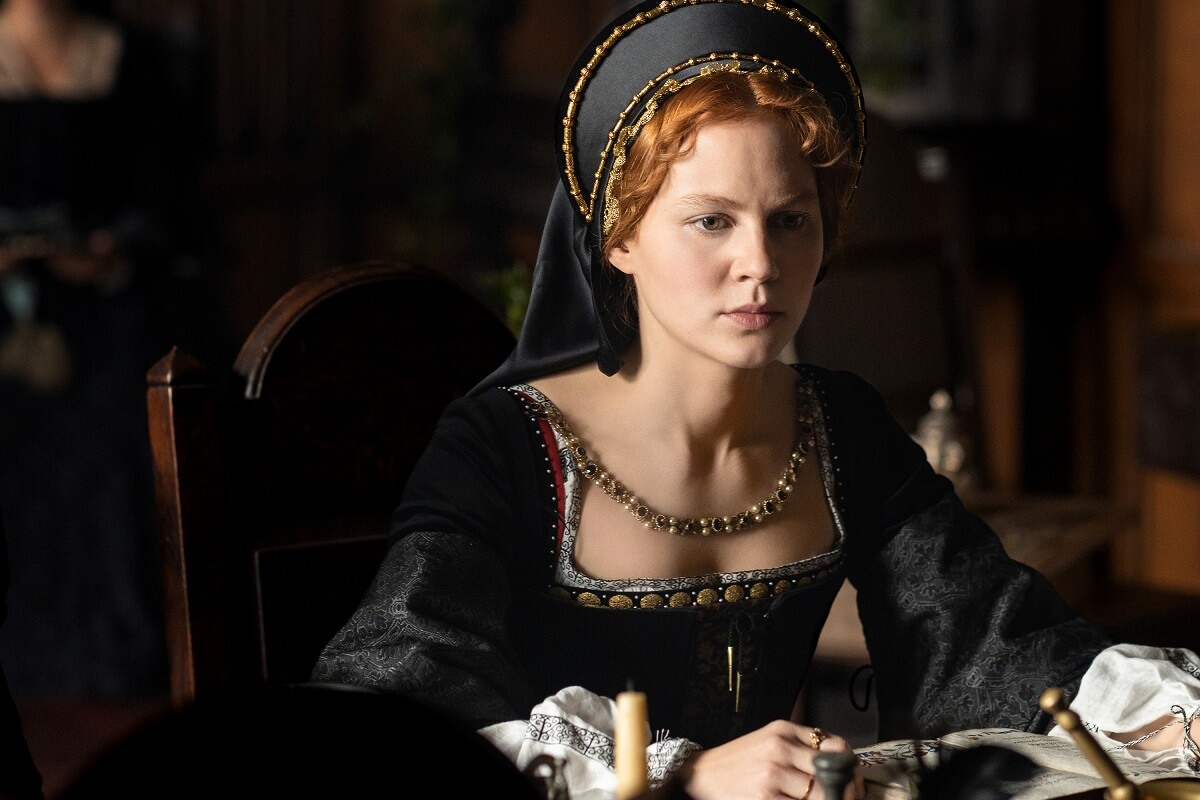 Later, Thomas outrageously flirts with Elizabeth and tells her that she got into his head. Kat warns Elizabeth that this might be unfair, but she will be held accountable for Thomas’ unseemly actions.

Catherine Parr (Jessica Raine) has a private word with Elizabeth before joining King Edward for a play performance. Catherine apologizes for upsetting Elizabeth by marrying Thomas and fears that the young princess will have a low opinion of her now.

The royal audience is seated and everyone enjoys themselves until a character representing the pope is introduced. Princess Mary (Romola Garai) is upset by the turn of events (she’s the only practicing Catholic in the family) and Thomas Seymour joins the players in asking if Lady Jane (Bella Ramsey) is giving the Pope a thumbs up or a thumbs up decrease. She doesn’t hesitate and says thumbs down, declaring that the Pope is the Antichrist.

Everyone laughs except Princess Mary.

Princess Mary has had enough and flees the room with King Edward following her. She asks to be excused and admits that she is upset that her brother has condemned the Holy Father. “It cuts me in half,” Princess Mary confesses, but then invokes the fact that she feels bad and needs a walk.

Lord Protector Edward Seymour (John Heffernan) asks Catherine to return the royal jewels now that she has married her brother, Thomas. Catherine claims they were left to her in King Henry’s will and an argument ensues. Thomas ends the battle of wills and says they will put the jewelry back. He then taunts his brother for wanting to wear them or give them to his future wife, while Edward remains in control of the situation and declares that they will go to Princess Mary.

The princess siblings finally have a chance to talk alone and they discuss King Edward’s hatred of Catholics. Mary believes she will end up being banished or worse. Elizabeth suggests that they don’t need to fight even though the world thinks they should disagree. Mary attempts to warn Elizabeth that Catherine is untrustworthy and that she mocked their father’s memory by marrying Thomas so quickly.

Mary suggests that Elizabeth move out when Thomas Seymour appears and asks her if she is angry. Mary sweeps away her concern and reacts strongly when Thomas calls his daughter. “I had a father and he left,” says Mary.

Mary turns to Elizabeth and whispers, “For your safety and your sanity, come to me.

The group – minus Mary – return to Chelsea Manor and Elizabeth and Jane work on their lessons while Catherine and Thomas engage in a screaming match over jewellery. Catherine calls Thomas weak for giving in to his brother, and Thomas reminds his wife that they have both Jane and Elizabeth under their roof. King Edward can marry Jane and Elizabeth is, according to Thomas, their “real gem”.

The brutal verbal battle is followed by loud sexual make-up which Elizabeth and Jane can hear from the other room.

That evening, Elizabeth informs Catherine that she is going to live with Mary. Catherine assures Elizabeth that she and Thomas are the only ones working on her side, and Mary is actually trying to entice her because she intends to become queen.

Catherine claims to love Elizabeth and hopes she will stay at Chelsea Manor.

The next day, Thomas finds Elizabeth alone and Elizabeth jerks off when Thomas approaches to kiss her. They talk about having sex and Thomas indicates that he is aware that she is interested in him. Elizabeth asks what she is to him and suggests that she is just a game piece he can use in these royal games.

Thomas is angry that she assumes he has no legitimate feelings for her and asks, “Do you think this is a smart move for me?” He assures Elizabeth that he is risking everything – including his life – by being with her.

Elizabeth points out that she is also risking her neck if a relationship between the two comes to light.

King Edward’s council meets and Henry Gray (Leo Bill) points out that they went to war for nothing. They lost Mary, Queen of Scots while doubling their enemies now that France has decided to protect Scotland. Pedro (Ekow Quartey) pleads for war and Henry is upset to speak with this man he doesn’t even know. Edward Seymour reveals that he knighted Pedro after the battle in Scotland.

This doesn’t help Edward Seymour’s case, so he asks Pedro out of the room and then tackles Henry Gray. Edward Seymour informs Henry that England will continue their war against Scotland and nothing Henry can say will change that.

King Edward meets Princess Mary privately and asks her to stop holding public Mass. Her actions harm her and she must convert to Protestantism. He sees her as a rallying point for heretics, but Princess Mary won’t. She thinks that is all Edward Seymour does, but King Edward insists that is not the case.

“You must convert and abandon Catholicism,” King Edward said, asking him to denounce his religion in front of the whole court. He quietly adds “please” to her request and Mary doesn’t respond. He once again asks please and Mary announces that she will return to the country rather than give up her religion.

Meanwhile, Jane and Elizabeth get along much better, and Jane flirts with two young men, including Robert Dudley (Jamie Blackley). The two young women are invited to hunt with Robert’s father, John (Jamie Parker), and Thomas Seymour.

Elizabeth leaves in front of the group, accompanied by Robert. She spots a deer and doesn’t wait for the group to shoot an arrow at the creature. She refuses to let the animal suffer and grabs Robert’s knife to dispatch the deer.

He died just as Thomas, John, Catherine and Jane go up. Only Thomas smiles at Elizabeth’s work.

John Dudley slaps his son for allowing Elizabeth to put herself in harm’s way.

Upon the group’s return to Chelsea Manor, Elizabeth receives a secret letter. This is from Mary informing him that she has left court and returned to Framlingham Castle. Mary reveals to her sister that she will be persecuted for her faith and wants Elizabeth to plead her case to their brother, King Edward.

Robert Dudley suggests that Elizabeth stay out of their game and not pick sides.

King Edward requests that they hold a prayer meeting with even Catherine Parr invited to attend. He informs his Lord Protector that he would also like to see Thomas Seymour more often. King Edward wants Thomas a lot more and doesn’t care that Edward Seymour hates his own brother. He thinks Edward should follow the scriptures and embrace his younger brother.

At Chelsea Manor, Thomas slips into Elizabeth’s room and warns her to shut up. They leave this room to go to an adjourned room where they can be alone. He wonders if the deer attack was meant to be a warning to him and Elizabeth laughs softly. She can choose not to believe him, but he sees her as beautiful.

He admits he’s in a more powerful position than he thought possible and yet he’s risking everything to be with her. “That would be a most pointless move and yet I want to play it all the same,” Thomas says, his voice burning as they stand by the fire.

Thomas confesses that he will let her ruin his life if that is what it takes to be with her.

They kiss and Thomas pulls away to caress her face. Elizabeth cannot bear the separation and brings him together again, and the kisses become much more passionate.

Neither is behaving reasonably but Thomas is determined to enjoy his life and asks Elizabeth’s permission to put her to bed. She doesn’t answer and he asks what he describes as a better question.

“Do you want me to stop?” Thomas asks. Elizabeth quickly whispers no.

Thomas demands to know if she thinks of him and Elizabeth admits that she does it all the time.

Elizabeth tries to kiss Thomas again and he pulls away, calling her a powerful tonic. He thinks he will have to ration himself but adds “if only I could”.

The scene ends with the two smiling while remaining fully clothed.

Edward Seymour goes to Framlingham Castle to speak with Princess Mary. Ambassador Guzman de Silva (Olivier Huband) attends their meeting, noting that he has spent the last few months there at the behest of his king who wants to ensure that Mary is not in danger due to religious changes and the fanaticism in England.

Sir Pedro joins the group and Princess Mary reveals that he is with her because he recognized the change in attitude in court against her and against the Catholic faith. Sir Pedro offered his services and Mary hired him to provide security.

Edward Seymour claims that Mary is held in high esteem and, as long as she is discreet, she can practice her religion without fear of persecution.

Back at Chelsea Manor, Princess Elizabeth works on her response to Mary’s letter while Kat reminds her that she is free to ask her opinion rather than Catherine’s. Elizabeth wants to make her own decisions and then reads what she wrote to Kat. She describes the English as being at war with themselves, but then crumples the letter without knowing what it really means.

As Elizabeth debates what to write, Edward Seymour tries to stop the religious powder keg from igniting.

Elizabeth eventually decides on a response and delivers the letter to the courier.

The courier delivers it to Princess Mary while Edward Seymour sits nearby.

Princess Elizabeth visits King Edward in the chapel as he kneels in prayer. She places her hand on his shoulder, while in Framlingham, Princess Mary looks upset at Elizabeth’s response.

Princess Mary rushes out of the church and Edward Seymour immediately retrieves the letter. He reads it, shaking his head slowly.

Princess Elizabeth confesses to King Edward that she prays for her sister to be converted so her soul can be saved. King Edward does not answer and instead seems to offer the same prayer.

Stop discriminating against students on the basis of their religious beliefs, President Kenyatta tells school administrators