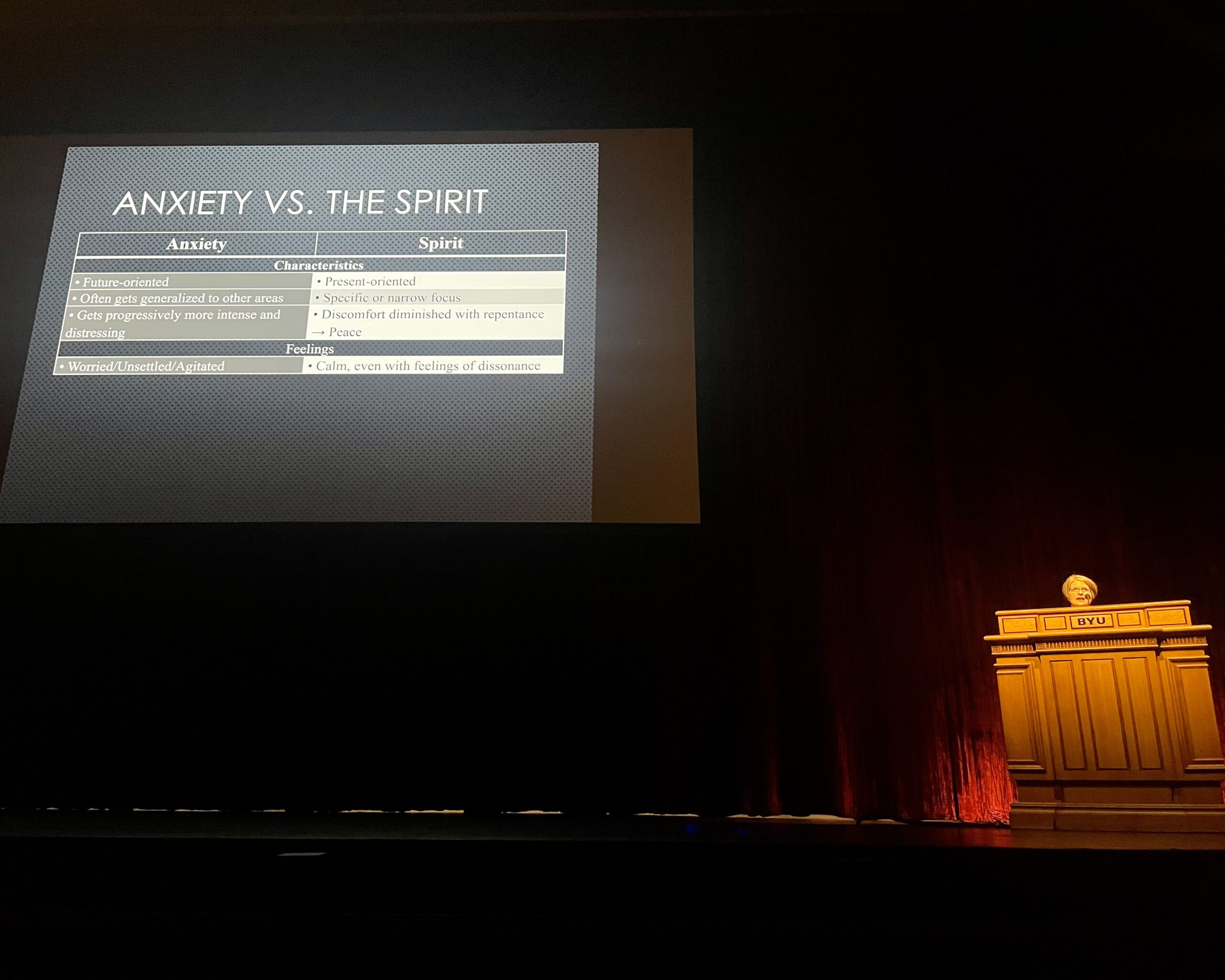 Debra Theobald McClendon, a clinical psychologist trained in marriage and family therapy, taught an Education Week course on Wednesday on feelings of anxiety, toxic perfectionism and religious OCD, in contrast to feeling the Spirit.

The Spirit Against Anxiety

However, anxiety can quickly become damaging when levels get too high and individuals are unable to cope. “It can cause spiritual deficiency,” McClendon said. “It is difficult and sometimes impossible to discern the love of God.”

McClendon mentioned that some of his clients who have experienced high levels of anxiety have expressed concerns such as thinking they don’t feel God and that God doesn’t love them.

She explained how our body produces stress hormones that disrupt and compete with our ability to sense the Spirit.

McClendon showed several slides with charts detailing the differences between feelings of anxiety and feeling the Spirit. She explained how important it is to be able to discern between the two in order to avoid developing toxic religious habits caused by excessive anxiety.

She added that revelation is a development process. When anxiety is high, disclosure may seem like it’s meant to be quick and sudden. “Spiritual promptings are not impulsive,” McClendon said.

McClendon clarified the differences between adaptive and toxic perfectionism. She described a person with adaptive perfectionism as having a goal-setting outlook, where they work hard and are resilient when certain goals are difficult to achieve.

On the other hand, toxic perfectionism encourages an unhealthy lifestyle. “You can never win with that approach to life,” McClendon said.

“Anyway, someone with toxic perfectionism will lose,” she explained. “If they don’t reach their level, they’ll think, ‘I’m not good enough,’ and if they do, they think, ‘My goals weren’t high enough.'”

McClendon provided a comforting thought from President Russell M. Nelson’s October 1995 General Conference address, Awaiting Perfection. He explained how the term “perfect” is used in the scriptures, but has a different meaning than what we may be familiar with. “Perfect” comes from the Greek “teleios”, which means “complete”. The infinitive form of the verb is “teleiono”, which means “to reach a distant end”.

McClendon pointed out that from this definition people learn that they are not expected to be error-free, but are expected to strive for some distant goal. .

“In OCD or obsessive compulsive disorder, the anxiety takes on an extreme and destructive nature and creates an even greater deficit in cognitive flexibility,” McClendon said. She also said that a person with OCD has obsessions, which are unwanted, repetitive, and distressing thoughts. These are accompanied by compulsions, which are repetitive behaviors that are done in an attempt to combat the anxiety caused by the obsession.

Religious OCD is called scrupulousness, which means that the content of distressing thoughts is religious in nature. “It’s an overuse or overapplication of religious principles,” McClendon said. “He takes the anxiety and bullies his way into religious belief and personal worship.” This creates toxic guilt and pathological fears, such as disappointing God or having impure intentions.

“God’s nature is good, but these individuals come to intensely fear God and see him as a rigid, malevolent dictator looking for the slightest reason to condemn them,” McClendon said.

She said that in healthy faith, personal worship is about creating peace and feelings of connection with spirit. With anxiety, this is done out of fear of punishment. “Those who scrupulously struggle have all the pains of a damned soul, but none of the relief of a saved soul.”

She briefly explained how dealing with these struggles can take many forms. This includes doctrinal clarification and help with spiritual concepts as well as formal treatment, such as therapy to help improve cognitive flexibility.

McClendon ended his lecture by reminding the audience that “Our Father is not interested in finding reasons to condemn us, He wants to exalt us”.