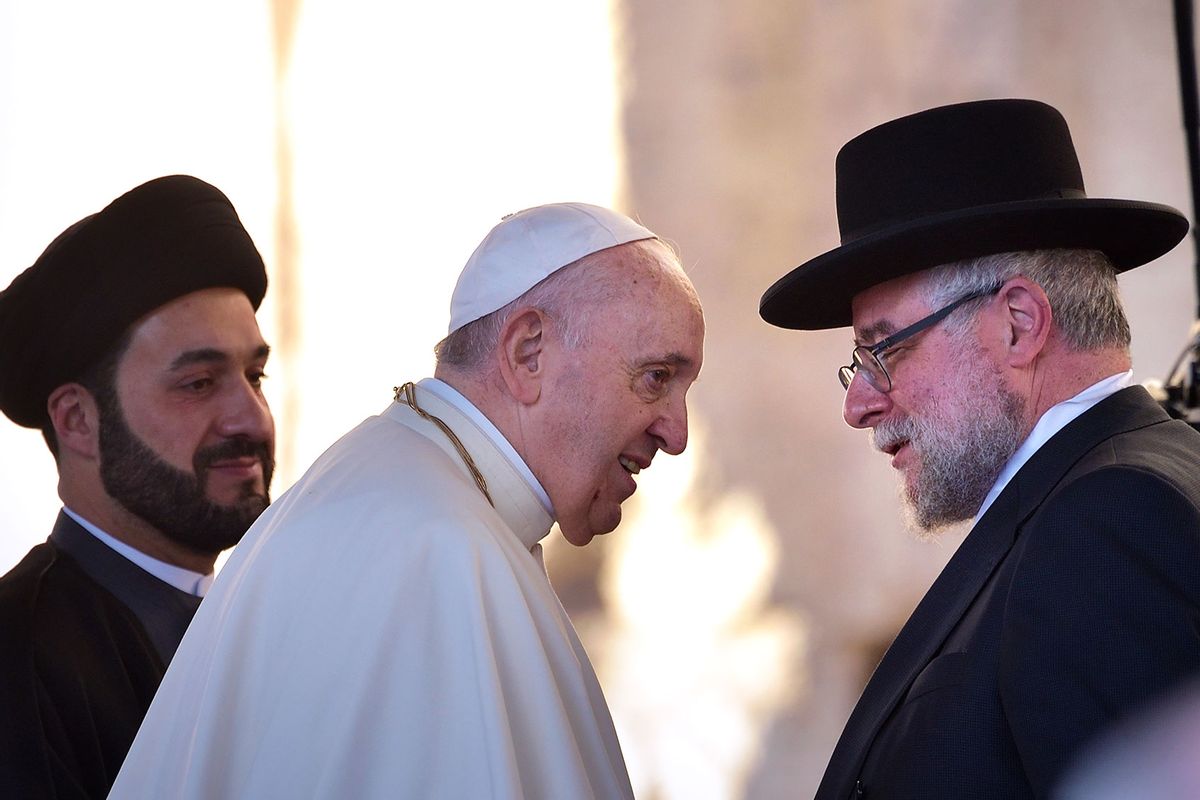 Could the Pope visit Saudi Arabia? The unlikely religious breakthrough that no one noticed

Although the Western media barely noticed it against the background of Russia’s invasion of Ukraine, political unrest and worsening inflation in the United States and Europe, as well as the global climate crisis, Saudi Arabia recently hosted the first-ever conference of its kind, bringing together prominent Muslims, Jews, Roman Catholics, Orthodox Christians, Evangelical Protestants, Hindus and Buddhists from around the world.

Jewish News, which describes itself as ‘Britain’s largest Jewish newspaper’, published a report on the conference titled ‘Fueled by kosher food, prominent rabbi joins Saudi Arabia’s historic interfaith summit’ . The report highlighted remarks by David Rosen, the former chief rabbi of Ireland and currently international director of interfaith affairs for the American Jewish Committee, who called the event a “breakthrough”.

The conference was sponsored by the Mecca-based Muslim World League (MWL), a 60-year-old NGO largely funded by the Saudi government that promotes a moderate form of Islam and “interfaith dialogue, religious tolerance, and peaceful coexistence with global religious authorities,” in the words of a recent State Department report. This conference can certainly be understood as an effort by the Saudi monarchy to restore its global image in the face of widespread criticism of its human rights record, and also to weaken or undermine the most extreme doctrines of Wahhabism long associated with the kingdom.

RELATED: Why isn’t the Arab world breaking with Putin? Take the example of Sudan

There is no doubt, however, that the MWL’s general secretary, Mohammad Al-Issa, has become one of the leading voices of moderation in the Muslim world and has made extensive awareness campaigns among leaders Jews and Christians. For example, he has repeatedly denounced Holocaust denial and in January 2020 led a delegation of Islamic scholars to visit the site of the Auschwitz concentration camp in Poland.

The Orthodox rabbis attending the conference were fed from kosher cuisine provided by the Muslim World League. This would have been unimaginable in Saudi Arabia just a few years ago.

Jewish News described the MWL conference as “a massive step forward in a country whose identity is built around strict religious observance,” noting that 10 members of the Jewish delegation were Orthodox rabbis, fed a kitchen kosher set up for MWL’s “compliments” event.“Such a gesture would have been impossible to imagine in Saudi Arabia until very recently.

“It’s a breakthrough to be here for the first time,” Rabbi Rosen told the Jewish News. “Saudi Arabia is the bedrock of Islam and has always sought to present itself in the purity of that faith – so for them to advance a pluralistic approach is incredible and shows how far they have come.”

The Times of India, the world’s most widely circulated English-language newspaper, also covered the conference, noting that a Hindu religious leader from Goa, Brahmeshanand Acharya Swami, would deliver a keynote address. Another one Indian newspaper, the Ahmedabad Mirror, called the Saudi conference the second historic opening of Hindu leaders to the outside world, 125 years after Swami Vivekananda represented India and Hinduism at an interfaith conference in Chicago.

A Sri Lankan newspaper, The Island, highlighted the “first-ever visit of Buddhist and Hindu priests from Sri Lanka to Saudi Arabia”, in a delegation led by the Most Venerable Banagala Upatissa Thera, president of the Mahabodi Society of Sri Lanka. Dressed in the traditional flowing saffron robe, Thera “focused her attention on the similarity of the teaching of Lord Buddha and the teaching and practices of the Islamic faith,” according to the report. He told attendees, “Many people would be shocked to think that Islam and Buddhism are comparable in any way, and yet if you look closely at their teachings and their efforts for peace, they are more similar. than we suspect.”

Vatican News, the official portal of the Holy See, reported on the presence of Cardinal Pietro Parolin, Vatican Secretary of State, using language that could be interpreted as both praise and criticism of the Saudi regime. Among the issues discussed were “the fundamental role of religion for society, the spiritual basis for fundamental human rights and the rejection of a view of an ‘inevitable clash of civilizations’ due to religious issues”, the outlet reported. . He also mentioned the need to “protect the integrity of the family and the upbringing of children”, an ambiguous phrase perhaps designed not to offend traditionalists of any faith.

Want a daily recap of all the news and commentary Salon has to offer? Subscribe to our morning newsletter, Crash Course.

Interestingly, given the war in Ukraine and the tensions between branches of Orthodox Christianity, prominent representatives of the Ukrainian Orthodox Church and the Moscow Orthodox Patriarchate were present. The conflict was apparently not mentioned, either at the conference itself or in subsequent statements issued by Orthodox authorities.

Archbishop Thomas Paul Schirrmacher, general secretary of the World Evangelical Alliance, posted about 20 photos from the Saudi conference on his Instagram account, including his meetings with leaders of many different faiths and images of Muslims praying. (Although the WEA represents some 600 million evangelical Protestants worldwide, many conservative evangelical churches, especially in the United States, are unaffiliated.)

This relaxed moment between the main branches of Christianity and the Islamic world may represent a late account with the 7th century. It was then that the Roman Catholic Church branded Islam a heresy, an opinion that remained prevalent among Christians for a millennium and certainly has not completely died out. Muhammad was often portrayed in Christian theology as an evil false prophet or a man possessed by demons, and Muslims were often called “Mohammedans”, an insulting term because Muslims believe Muhammad was a messenger of God, not himself. even divine.

In the 13th century, Thomas Aquinas wrote that Muhammad “produced no supernaturally produced sign”. A century later, in Dante’s “Divine Comedy”, Muhammad was depicted being tortured like a heresiarch, with his body split open and his entrails hanging out.

It wasn’t until the 20th century that the Vatican recognized Islam as a legitimate religion – but even in that century Pope Benedict XVI quoted a Byzantine emperor calling Muhammad “wicked and inhuman”.

It was not until the 20th century that the Vatican issued statements recognizing Islam as a legitimate world religion, but controversies continued over dialogue between Christians and Muslims, over whether Islam was a religion or a political system and on the delicate question of mixed marriages. As recently as 2006, Pope Benedict XVI quoted a 14th century Byzantine emperor as saying, “Just show me what new Muhammad brought and you will find only evil and inhumane things in it, like his command to spread through the sword faith. he preached.”

Perhaps this unfortunate quote, which the pope later said he regretted, and which led to condemnation of Muslim governments and attacks on Christians in Muslim countries, was something of a blessing in disguise.

Prominent Muslim religious leaders, scholars and government officials sent two letters to the pope, the first with 100 signatures and the second with 138. The second, entitled “A common word between us and you” (a quotation from the Koran) helped pave the way for an unprecedented exchange of opinions and visits.

In 2007, King Abdullah of Saudi Arabia visited the Vatican and met with Pope Benedict, although Western and Muslim world media reported this historic event quite differently. Western reports highlighted Benedict XVI’s concern for the small Christian minority in Saudi Arabia, as the meeting was presented to the Saudi public as a moment of immense pride for the land of Mecca, to which Muslims in the whole world.

Abdul-Rahman Al-Rashed, a prominent Saudi journalist who can be understood to be close to the views of the monarchy, criticized Pope Benedict XVI for “hearing about terrorist acts committed by Muslims and listening to their recordings which exalt their actions within the framework of Islam,” saying that “he should know better,” and that such actions do not represent Islam.

Things have changed so much in the last 16 years that Pope Francis, who has already visited a few Muslim countries, said practically the same thing: “It is not right to identify Islam with violence. It’s not fair and it’s not true… . If I speak of Islamic violence, then I must speak of Catholic violence. Al-Rashed not only praised Pope Francis for his visit to the United Arab Emirates in 2019, but sharply criticized Muslims who opposed it. It would be a major political and theological undertaking for the pope to visit Saudi Arabia – but it is starting to look possible.