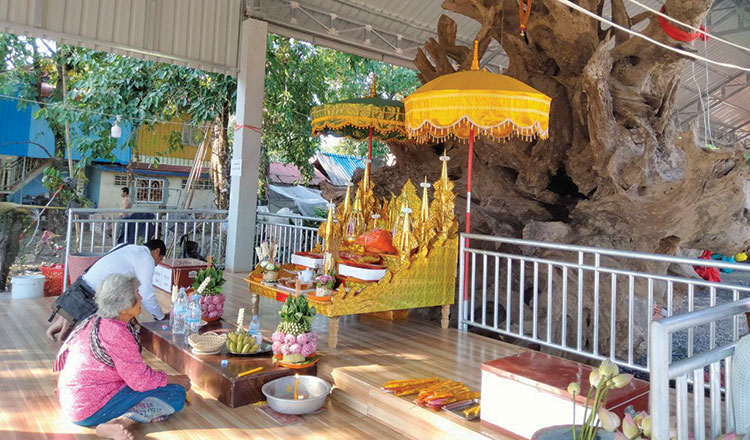 Animism takes on religious proportions in the Kingdom

Traveling on Highway 21B towards Kean Svay district of Kandal province for about an hour from central Phnom Penh, one will reach a special shrine on the right side of the road.

Next to the shrine is a huge fallen gum tree, both shaded under a large open shelter.

The place is called “Nakta Chheu Teal”, and the tree which has stood on the river bank in the area for as long as local residents can remember before it fell in May this year and has moved to its present site has become a center of faith in the community.

Passers-by usually stop to pay homage to the “sacred tree spirit” and pray for good fortune and health. They offer bananas to the shrine, burn and place incense in the ash pots and pour water over the tree from a bottle and drink the rest of the water.

Ouk Bunthen, a member of a committee responsible for the shrine, said local villagers were happy to have the 28-meter-long tree as a symbol of their home.

“People love the tree so much that they collectively contributed $10,000 to build the sanctuary and the platform to keep the tree above ground to protect it from termites,” he says.

Au Chanthou, 39, a Phnom Penh resident who made his first visit to pray to the tree, said he was so surprised to see such a gigantic tree.

“I feel refreshed after praying for happiness and I could feel an aura of peace within me,” he says.

Frequent visitor Yin Sinon, 62, held three incense sticks in her hand, waiting for her turn to offer prayers, during a talk at the shrine.

She says she is now a loyal follower of the Nakta Chhey Teal because the spirits granted her wishes.

“The first time I came here, I prayed that my grandson would find a job, and shortly afterwards he was hired by a company,” she adds.

There is no denying that the sacred trees have become a symbol of faith for the people of Kandal, much like what the Preah Ang Dongker shrine, located on the shores of Phnom Penh, is for the inhabitants of the capital. The shrine with a statue of a four-armed god is where Phnom Penh residents go when they have worries or hope their wishes will be granted.

On Buddhist holy days, which fall on certain days of the month, the musical tones of Pin Peat (a traditional Khmer musical ensemble) played near the shrine give holiness to people who throng to pray to the holy spirit of the shrine and place their staff of ‘incense.

Not everyone comes to ask. Sou Kaden, 37, is a devotee who visits the shrine to “reward” his wish granted by the spirit.

“I had chronic back pain, but the spirit helped me recover,” he said.

These are just two paradigms to reflect what is happening all over Cambodia which, despite its status as a Buddhist country in the technological age, still sees its masses subscribing and believing in animism.

It is not uncommon to hear people talk about their strong belief in nakta or holy souls, ghosts, demons and spirits that possessed natural forms, from mountains to lakes. Every part of the country will have at least one form of divine animist that local people will revere: Yeay Mao in the coastal area, Neakta Kraham Kor in the North East, Nakta Khlaing Moeung in Pursat and many more.

While it’s hard to prove that objects, places, and creatures all possess a distinct spiritual essence, the number of people becoming believers seems to be fueled by high-octane momentum today.

Director of the National Committee for Khmer Customs and Horoscopes in the Ministry of Cults and Religion, Im Borin, said more people than ever, from farmers and laborers to high-ranking officials and tycoons, have turned to the animism, especially over the past 10 years.

“Magnates and high-ranking officials generally believe they have some form of kru, or personal guardian souls, who protect their businesses or help them gain promotion,” he says.

“They will build shrines in their homes for their kru and they also have faith in nakta and fortune tellers.”

Borin believed that superstition could bring prosperity, happiness and success to those who firmly believe in it.

“It’s like positive thinking. Believing in it with proper reflection will bring prosperity when people pray, and seven out of 10 can succeed,” he adds.

“Those who do not believe in animism at all should not
making fun of superstition, believer or places of worship or purposes as they have become part of our identity,” he said.

Borin says animism and spiritualism existed in Cambodia even before Hinduism and Buddhism came to the Kingdom centuries ago.

Nevertheless, many researchers and academics, including the country’s leading psychiatrist, Ka Sunbaunat, have said that the existence of what he described as “unreasonable superstition” in the 21st century is due to people’s general lack of trust in their life.

“In a developing country like Cambodia, people have experienced difficulties, and since they cannot think of a practical way to solve their problems, they turn to what they cannot see, and what the Khmer people have done for generations,” he said. Khmer time in a recent interview.

“There should be a scientific explanation for everything, including so-called miracles, and unreasonable beliefs can have adverse consequences such as loss of wealth and cheating,” he said.