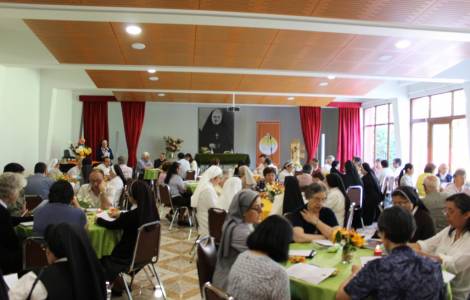 Santiago (Agenzia Fides) – An invitation to the communities, and in a personal way to each consecrated person, to participate “responsibly in the exercise of discernment which commits us to the process that our country is living”, was addressed by the President of the Conference of Men and Women Religious of Chile (Conferre), Father Mario Salas O. de M., in view of the consultation on September 4, where the Chileans will be called upon to express themselves on the text of the new Constitution (see Fides 03/11/2022; 03/14/2022; 04/08/2022; 25/07/2022).
“We live in a time marked by different perspectives and reflections, positions and debates, and in this line, as members of the Church, assuming even more our consecrated life in a prophetic perspective, it becomes imperative to participate in this process”, writes the President of Confirm in a letter to the religious, sent to Agenzia Fides. God sends us his Holy Spirit – he continues – “because a healthy discernment according to the heart of a believer, is made not only by the reality that we place in the hands of God, but above all by listening to the will of God for our reality”.
Two spaces for reflection will be held virtually, via zoom, in the coming days: the first on August 2, from 10 to 12, on the theme “Denominational educational projects for the new Chile? organized by the Education Commission of the Conference and by the Education Sector of the Episcopal Conference. The second meeting, on August 9 from 7 p.m. to 8:30 p.m., is organized by the Department of Justice and Peace, on the theme “New opportunities and constitutional weaknesses, in terms of discernment”.
The President of the Conference underlines: “the current times in which we find ourselves as a country oblige us as religious life to take this process seriously” and recalls the message of the Bishops of a few days ago on this subject (see Fides 25/7/2022). He then noted the importance of reading and studying the proposal for a new Constitution, expressing his concern about the polarization of society: “We are faced with a choice between two options with strong connotations, one against the other, which makes the decision of each citizen Hence the importance of making a good enlightened discernment and not being taken in by radical positions in both sectors, which make civic dialogue impossible, which is the basis of a democratic society”.
Religious life, present since the origins of the nation, as well as missionary and evangelizing activity have contributed to the life and development of our people in many other areas, writes Father Salas. “These historical certainties lead us once again to put ourselves at the service of our country, contributing to the development of our people”, wishing to unite the human family in the search for sustainable and integral development, as our Bishops wish.
The President of the Conference appreciates “the effort to include the proposal of social rights, the environment and the recognition of indigenous peoples in the constitutional text” because they place at the center of all the human being, his care and its promotion in society. On the other hand, the approach to certain values ​​that we consider fundamental, “which go beyond a specific religious vision”, as the text says on the value of human life, on the “right” to abortion, like the approach to education, is religious freedom, gender identity, among other concerns. Father Salas concludes by inviting men and women religious to carry out a good process of discernment, so that “the option that each one will have to take is made in a conscious way, seeking the best for Chile”.
According to the latest Church Statistical Yearbook, 190 non-priests and 3,353 nuns live in Chile. (SL) (Agenzia Fides, 07/29/2022)

How religious beliefs can help or hinder accessibility