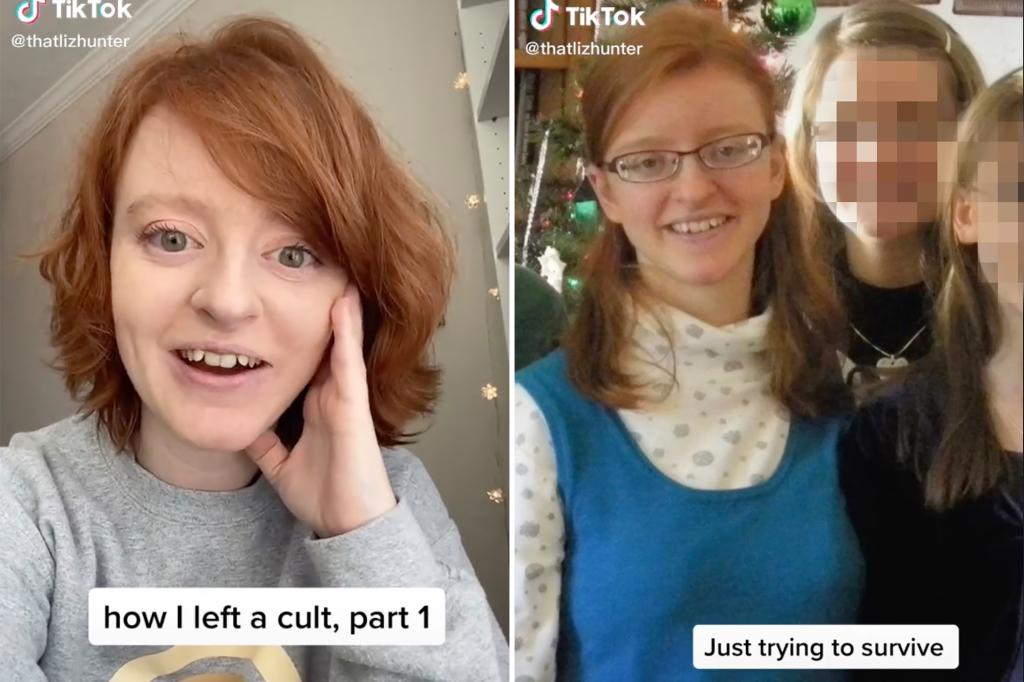 A 28-year-old woman who was raised in an ultra-religious Christian ‘sect’ shares her story on ICT Tac.

Elizabeth Hunter was raised by her adoptive parents in Texas in an organization called the Institute in Basic Life Principles and its home-schooling arm, the Advanced Training Institute.

The Conservative Ministry — founded by Bill Gothard and made popular by reality TV stars Jim Bob and Michelle Duggar — includes teachings that are grounded in conservative Christian principles, some of which can be seen as extreme.

On his TikTok and instagramHunter explains the strict rules she grew up with and how she finally realized her family was part of what she says is a cult.

Hunter was abandoned by her biological parents at the age of 3 and spent several years in and out of foster homes. Once her new parents took her in at age 9, they raised her with rigid IBLP-approved restrictions.

“Everything your father said was absolute law, and you had to do whatever your father wanted you to do or disobey God himself,” she said. Explain in a video.

Hunter was also forbidden from wearing clothes with words on them because his mother felt they drew attention to her body. She said she couldn’t wear green either, simply because her father didn’t like the color.

In one video, the avid reader lists books she’s been banned from reading, including “Bridge to Terabithia” (there’s the word “hell”) and the American Girl book collection “Meet Felicity” (Felicity is too independent and lies to him Parents).

Every time she got sick, her mother would tell her, “’God is punishing you because you came out of the protective umbrella. That’s why you’re sick. You must have done something to be punished.

As a young girl, she was taught to bake bread, sew and play the piano in order “to be a good wife”. When she was 17, her parents made her think about marriage, although she was not allowed to flirt or date because her father would choose her husband.

As is common in the IBLP, Hunter was tasked with raising and home schooling her younger siblings. Many IBLP members do not earn college degrees, but Hunter convinced his parents to allow him to pursue a degree in education to better teach his siblings and future children.

She was 22 when she enrolled in Bob Jones University, a non-denominational Christian school in South Carolina that has been classified as the most conservative college in the country. During her second year, through therapy, she realized that she had been raised in a cult.

“I didn’t know I was in a cult until I was a sophomore in college, and I was talking to my therapist,” she said. said in another clip. “I was explaining that my parents used Duggar’s ‘buddy system’ to discipline me and my sister.”

“When I told this story to my therapist, she looked at me and said, ‘Elizabeth, not only is this child abused, but your parents are part of a cult.’ And that came to mind, and I was like, ‘Oh, yeah, you’re right.’ »

A year after her first revelation, she also came to terms with her sexuality and came out as gay. She was ousted by her college and was nearly expelled in her senior year, which led her to sue the Federal Department of Education for allowing legal discrimination in Christian schools. The trial remains ongoing.

Hunter has since broken away from IBLP and now works in TV news as a writer and digital creator. Her debut novel, “Hearts of Clay and Tempest,” a retelling of “The Little Mermaid,” will be released June 14.

She continues to share her insights from her traumatic childhood and subsequent recovery to help others through their ordeals. Hunter also talks about the dangers of repatriation.

When she went to enroll her sister in public school, she learned that she had been rehoused and had never been legally adopted by the people she calls her parents.

“My legal guardians drove me to a house, unloaded my only backpack full of stuff and then left,” she said. said. “For the rest of my life, I thought I was adopted by my mom and dad. I told people. I thought they were my parents. Me, at nine, I thought that I had been adopted.

“When I was relocated at 9 and thought I was going to be adopted, within two weeks my parents told me I had asked to call them mum and dad,” she said. “I remember being so happy that someone wanted to be my mom and dad because, from age 3 to 9, everyone was telling me very clearly, ‘I’m not your mom.’ “I am not your father.” And those were the first people who said, “Yeah, you can call us mom and dad. » »

“So it’s hard to let that go, even though I thought they were abusive and bad in a lot of ways,” she explained. “I know they’ve always loved us even though they haven’t completely done right with us.”

“And those are the only parents I have.”