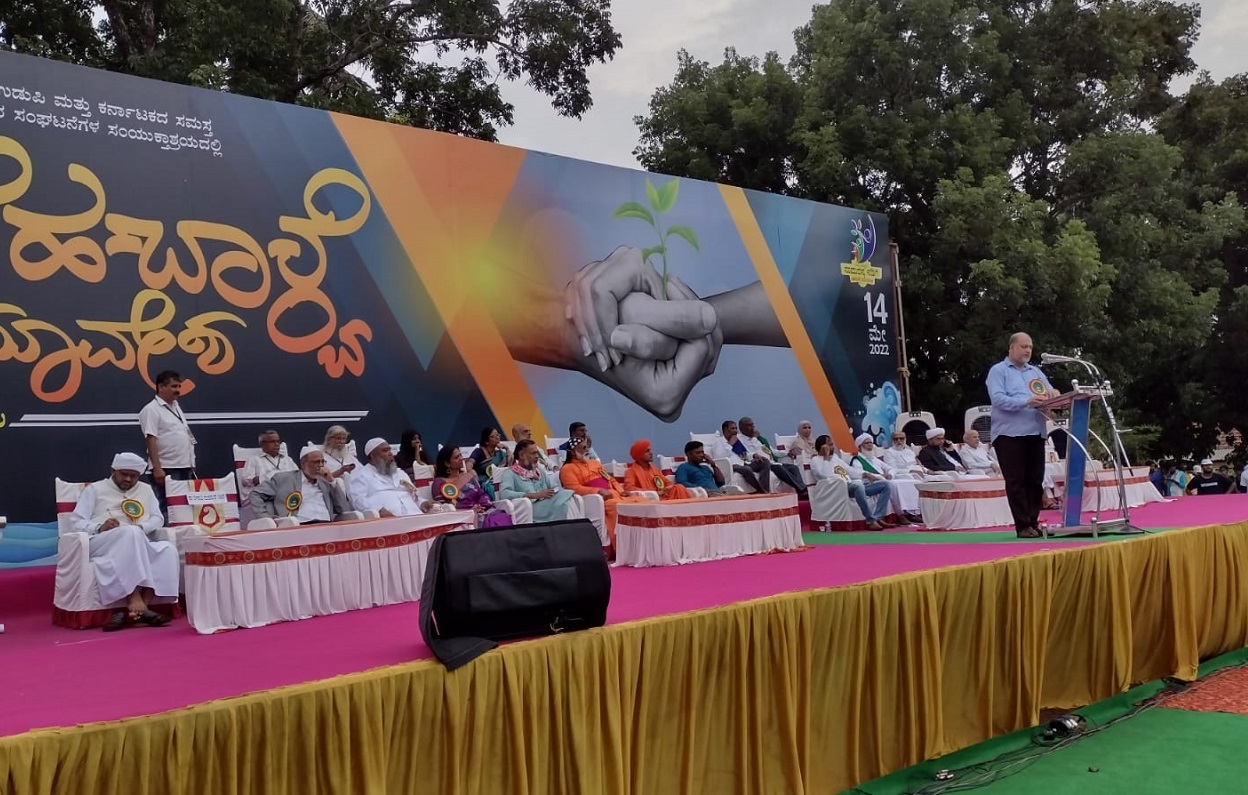 More than a thousand people of all faiths attended the harmony convention organized by the citizen group Sahabalve aimed at rekindling inter-religious dialogue amid recent communal tensions.

There was a carnival atmosphere in Udupi as the citizens’ group Sahabalve organized a march and harmony convention in the coastal town, aimed at rekindling interfaith dialogue amid recent communal tensions. More than a thousand people marched from Hutatma Chowk in Ajjarkad in Udupi to the Christian School (Mission Compound) on Saturday afternoon. The march was led by kambala runners or the traditional buffalo runners of coastal Karnataka. It was attended by hundreds of people of all faiths while there were paintings by Swami Vivekananda and BR Ambedkar, among others. It also included pilivesha dancers or tiger dancers, a traditional art form from the Karnataka coast, and people playing the dafli, a folk instrument.

The highlight of the march was a harmony convention held at the campus of the Udupi Christian School. The main guests of the convention were social activist Yogendra Yadav and former IAS officer Sasikanth Senthil. Speaking at the event, Yogendra Yadav said: “About sedition and who is patriotic and who is not, who is national and who is anti-national. Some people keep giving these certificates to others. Those who bring the people of this country together are the patriots, those who try to divide them on religion, etc. are anti-nationals.”

The convention comes months after a controversy over wearing the hijab in classrooms that began at a government pre-university college in Udupi. The Karnataka High Court banned the wearing of hijab in class in March. Following this, Muslim traders were expelled and barred from temple fairs on the Karnataka coast, including the popular temple fairs at Kapu Mariamma Temple and Mulki Bappanadu Temple.

It’s a carnival in Udupi today… People of all faiths here, celebrating diversity and coexistence. Here is a sight I never thought would see a march of Muslim women flanked by the famous Pilivesa of Udupi. pic.twitter.com/CdUnle0DR3

Deborah Samuel: Yet another victim of religious intolerance