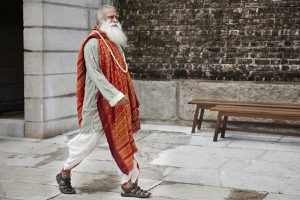 Isha Foundation founder Sadhguru Jaggi Vasudev said there was ‘a lot of heat’ in TV studios, which is overstated to suggest there is a rise in religious intolerance in the country while emphasizing that the past decade has been free of major communal violence.

In an exclusive interview with ANI, the spiritual leader spoke about his university years, saying that “major riots took place in the country” while contrasting with the last 10 years “when no major community riots took place. in the country”. The founder of the Isha Foundation, Sadhguru Jaggi Vasudev, recently arrived in India after traveling 30,000 km on a solo motorcycle across 27 countries as part of his “Save Soil” campaign.

“I think we tend to overdo things a bit. Yes, there are a few issues that have come up for debate and there is a lot of heat on the TV channels. You don’t see it anywhere on the street. You walk through Delhi or any village in the country, there is no such intolerance or violence or anything,” Sadhguru said when asked about claims of growing religious intolerance. in the country.

He made a strong case for action against those involved in the violence while pointing out that there is “hype” about the heat in TV studios when discussing issues with religious overtones.

“There are consensus issues where there are ongoing debates. They are all in court. You should allow the law to go that is the way. But now once you have the momentum people are happy to go everywhere and in case there is an election or something in the area people use it to do these things,” he said. -he adds.

Sadhguru’s comments followed violent incidents reported in Delhi, Madhya Pradesh, Rajasthan and Uttar Pradesh. Recently, US Secretary of State Antony Blinken claimed that there was an increase in attacks on people in places of worship in India.

The Isha Foundation founder recalled his graduation days when incidents of communal violence were considered “normal”.

“But I feel like those things (community violence) have gone down dramatically over the past 25 years. When we were in college, there wasn’t a single year where there wasn’t a major communal riot in the country. Every year, somewhere, there were big (riots). I haven’t heard of (community violence) for at least 5-6 years or maybe 10 years. You haven’t heard of such things. Some flashpoints have occurred, unfortunately. But big communal violence, like we thought was normal for this country to have, you don’t hear that, which is a very positive thing,” he added.

Sadhguru further stated that there are people looking for trouble all the time. “I think the law should contain these people because, in all communities, people want to take care of their lives, they want to get an education, find jobs and earn a good living. Above all, the women in their family want to live well. They don’t want their men bickering and bickering… They don’t have the time or the patience or the intention to have any in that direction. Such elements are there everywhere,” he said.

When asked if he was faced with questions about secularism in India, the spiritual leader pointed out that “some people with their own interests are talking about it, but the word India commands much more respect than ever”.

“A lot of people think Indian elections are the most fantastic thing in the world. In the US, they don’t trust their own electoral system. They think our system is ugly and India is doing well. That’s the common refrain I hear. There are few people with strong opinions due to their own interests who talk about this and that. But in general, I think the word India commands a lot more respect than ever before,” he said.

Do humans have a “religious instinct”?

Religious freedom and the absence of religion are under threat