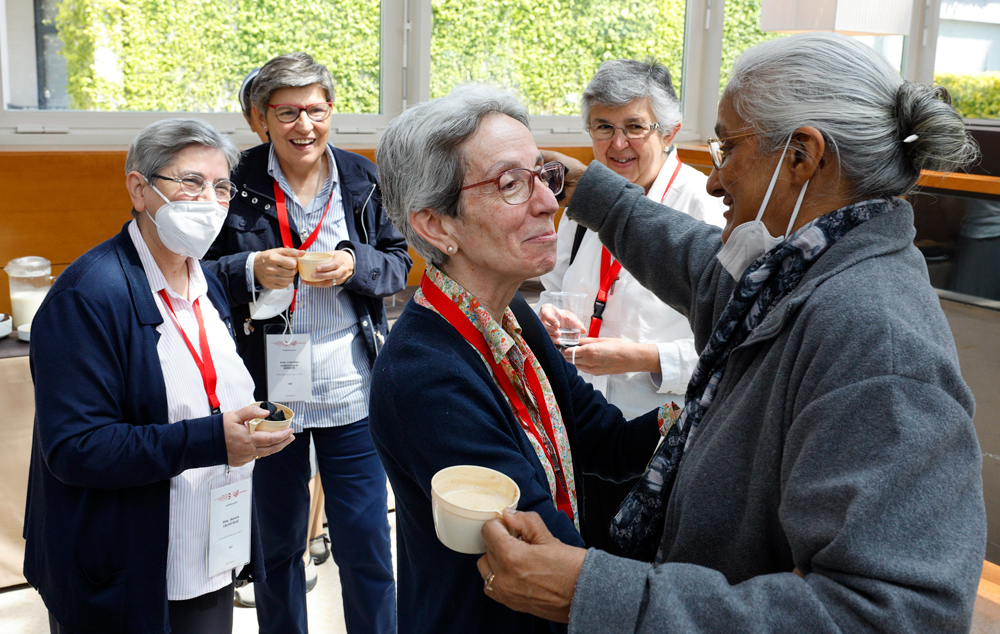 Sister María Rita Calvo Sanz, Superior General of the Sisters of the Company of Mary, Notre Dame, welcomed Sister Monica Joseph, Superior of the Congregation of the Religious of Jesus and Mary, during a coffee break as the superiors of the orders female religious gather for the plenary assembly of the International Union of Superiors General in Rome on May 3, 2022. (CNS Photo by Paul Haring)

ROME – With prayers and laughter, songs and frowns, more than 500 superiors of female religious orders from around the world have gathered in Rome to talk about the challenges they face and the gift these challenges represent for their congregations, the Catholic Church and the world.

Dressed in a sari or a shiny batik skirt or a long black habit or trousers, the members of the International Union of Superiors General gathered from May 2 to 6 and explored the theme ” Embracing vulnerability in the synodal journey”.

More than 700 superiors were registered for the plenary assembly; 516 of the sisters attended the meeting in person, and the rest followed online.

The meeting began with theological and practical explorations of vulnerability and the ways in which the experience of humility, weakness, brokenness and discrimination reflects the stripping of Christ and solidarity with the poor and excluded. .

“Pope Francis’ call to the synodal process is ultimately a renewed call to mission, but not from the position of power and authority hitherto occupied,” said Sister Anne Falola, Nigerian member of the Missionaries of Our Lady. of the Apostles, May 2. .

The communion, participation and mission that are hallmarks of a synodal church, she said, “cannot be achieved without accepting and embracing our vulnerability.”

Sister Falola explained to the superiors that there are two forms of vulnerability: “from above”, which consists in renouncing the power, honor or rights that one legitimately has, and “from below”. , which involves accepting one’s limitations and imperfections.

In her own life, she says, she had to accept “my own vulnerability as a woman in a patriarchal society and church, African in a world of global power struggles, religious in a world of growing religious indifference and intolerance, missionary in a xenophobic world and called to the periphery in a world where only the center counts.

Brazilian Cardinal João Braz de Aviz, prefect of the Congregation for Institutes of Consecrated Life and Societies of Apostolic Life, told superiors May 3 that their organization has operated synodically since its founding more than 50 years ago, recognizing each other as sisters and accepting the differences between them as something that enriches them all.

Before delivering his speech, the cardinal celebrated Mass with the sisters, focusing his homily on the characteristics of discipleship: fidelity to the teaching of the apostles; to promote communion in the church, with and under the pope; cherish the Eucharist, “the sign that God wants to be always close to us”; and confident in the love of God.

Claretian Sister Jolanta Kafka, president of UISG, told superiors that decades of experience, including the experience of the COVID-19 pandemic, had made the sisters increasingly aware that “we can bring our concerns about the needs of people and the planet to many people”. encounters and different contexts.

“The prophetic nature of religious life calls us, as superiors general or congregational leaders, to mobilize as a worldwide fraternity,” she said. “Our interconnectedness and growing understanding of the importance of our cross-cultural prophetic witness invites us to develop ways to build communion in diversity in today’s world.”

Sister Nurya Martinez-Gayol Fernández, Spanish member of the Servants of the Heart of Jesus, told the superiors that as women endowed with a specific spirituality defined by their founders and transmitted by generations of their members, they have an important contribution to bring to the larger church which seeks to foster the spirituality which must underpin synodality.

Spirituality is “the state of mind with which we face reality” and even try to take charge of it, she said, while “synodalism designates a way of living and acting that defines the ecclesial community in its relations”.

Part of accepting vulnerability, she said, is preparing yourself and your community for the inevitable disappointment that will come when efforts to create a more synodal church encounter difficulties or delays or opposition. pure and simple.

Synodality, she said, “calls for specialists in patience.”

Ghana: “My religious faith, an integral part of my legal and political vocation” – President Akufo-Addo