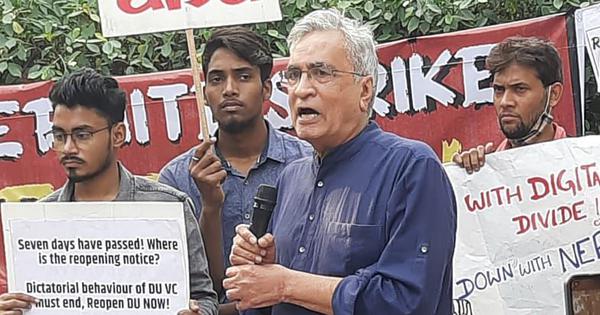 An event planned in the city of Indore of Madhya Pradesh by the author Chamsoul IslamCongress leader Digvijaya Singh and others on Friday was canceled by authorities in charge of the venue citing “government orders”, NDTV reported.

In a letter dated March 25, authorities from the Textile Development Trust, which runs the venue, Jall Auditorium, told organizers the event would not be permitted for “unavoidable reasons”.

Islam, a retired professor from Delhi University, told NDTV that he held talks across the country on the need for religious harmony.

“Some people try to drive a wedge between Hindus and Muslims,” ​​he told the news channel. “I want to read Maulana Hasrat Mohani’s song about Lord Krishna. I read this in 20 places in Bhopal and there was no problem. But they want me to stop.

Author Ashok Kumar Pandey, who was also due to attend the event, wrote on Twitter that attendees would hold a discussion on the Constitution.

“It’s okay,” Pandey wrote on Twitter of the cancellation. “We will come back, we will talk again. We will talk wherever there is space.

In response to Pandey’s tweet, a user posted a copy of the letter sent by the Textile Development Trust.

Textile Development Trust Secretary MC Rawat told NDTV that they had received information from the administration that the event could not be allowed to be held at Jall Auditorium.

“The government told us not to allow it… Tomorrow, if the government says they want to take control of this office, I will have to give it to them,” Rawat told the news channel, striking his office, NDTV reported.