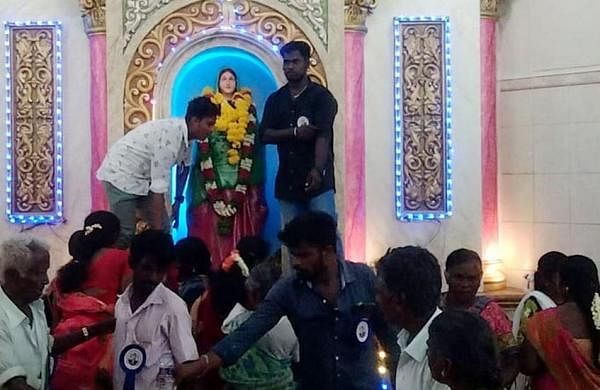 TIRUCHY: Amid the stories of communal hatred, you can also see places of worship where people from various religions congregate. Vellaimarialyal Church in Illupur, which celebrated its 327th anniversary in 2022, is one such shrine where Hindus and Muslims visit in large numbers.

Father Arockia Raj P, parish priest, says: “The church was built in honor of a British woman called Mary or ‘Vellai Mary’, who came here in the 17th century and helped the poor by providing education and health care.One night, as she was returning home, men on horseback attempted to rape her.
Frightened, she hid behind a small structure, but the men attacked her with their swords and killed her.”

Folklore says that Mary appeared in the dreams of the villagers, told them of her death and asked them to bury her there. Later, people erected her statue and started worshiping Mary as she granted all their wishes.

With the 40-day Lent underway, the church receives thousands of visitors every Sunday. During the fifth and sixth Sundays, which fell on April 3 and 10, people of other faiths arrived in large numbers and also held an ‘annadanam’ for all worshippers.

“Christians avoid non-vegetarian food during Lent and have no celebrations. People of other religions come here and pray to Mary, who was killed on the fifth Sunday. People sacrifice goats, cook them and serve them to the poor,” says Father Arockia Raj.

Muthu, one of the visitors, said her wish to have a child came true after offering prayers at the shrine. Another local, Kumar, said people from other religions sacrificed chicken and goats as a way of thanksgiving to Mary and offered the food to the poor.

The practice of distributing food to the needy has been going on for five decades, residents add. On April 10, seven families provided food for visitors. Fr. Arockia Raj says about 12,000 to 15,000 people visited the church these two Sundays from various places like Tiruchy, Kumbakonam, Thanjavur, Dindigul,
Karur, Madurai and Sivagangai. The church has approximately 2,500 to 3,000 members.