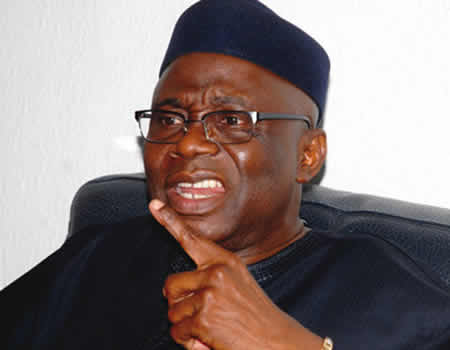 Ahead of the 2023 general elections in the country, Pastor Tunde Bakare, duty overseer of the Citadel Global Community Church and presidential candidate of the All Progressives Congress (APC), urged Nigerians to avoid ethnic or religious politics , saying they should prioritize nation-building. above any religious or ethnic feeling.

Bakare made the call on Sunday as he spoke with reporters at the church service in Oregun, Ojota Lagos, in reaction to the Muslim-Muslim presidential ticket of Asiwaju Bola Ahmed Tinubu and the former Borno State governor. , Alhaji Kashim Shettima Mustapha, even as he urged Christian leaders to learn from past mistakes not to participate in politics.

The cleric, who noted that the national discourse had plummeted with vehement opposition, rejections, resignations and resentment, following the choice of a Muslim as the APC vice-presidential candidate , by members of the Christian community, however said such aversion to what has been dubbed a Muslim-Muslim ticket was not unexpected, but quickly instructed Christian leaders to bring all candidates and their running mates through the country’s political parties at the negotiating table with an open mind to discuss and agree on a path for nation-building and national development.

“In the future, before 2023, we must learn from our mistakes. Christian leaders must, at this stage, bring candidates and their running mates to the negotiating table, doing so with an open mind and on the basis of a clearly articulated charter for nation building and national development.

“This moment calls on every Nigerian, North, South, East and West, to renew their commitment to the nation, building on what worked in the days of our founding fathers, while learning from their mistakes and imperfections as we build a more perfect union,” Bakare said.

According to him, such a strategic engagement would be reminiscent of the interventions of the Save Nigeria Group (SNG) in 2010 when it hired then presidential candidates on the basis of the SNG charter, A Contract to Save and Transform Nigeria, affirming that Christian leaders in Nigeria should interview development candidates and convene a strategic competition to define the minimum standards in all sectors of governance below which no Nigerian, Christian or Muslim, should be subjected.

Bakare, while making the suggestion, said that these talks must take place before September when the campaigns would officially begin, even he further called on Christians in northern Nigeria who felt marginalized by the choice of a Muslim from the north as running mate, to note that the time had come to shift the conversation from politics to governance.

“Christian leaders must then carefully engage each presidential candidate and running mate based on this charter and provide unified direction to the body of Christ in Nigeria after evaluating each presidential/vice presidential ticket based on key performance indicators around of the Charter.

“It would be a more mature, structured and strategic way of responding to the situation compared to the emotional reactions that have dominated the body politic since the choice of a running mate was made by the APC presidential candidate.

“It is time to question the impact of politics on development. In this regard, key questions need to be asked: What will the candidates do to change the social, economic and political landscapes in Northern Nigeria to ensure the emergence of an informed electorate who will make political decisions not based on religion or region, but on rational indices? of character, skill, capacity and policy? ” he said.

Speaking further, the APC presidential hopeful, who cited a UNICEF report suggesting that 18.5 million Nigerian school-aged children were out of school, an increase from 13 million previously reported, the majority of these children are from northern Nigeria, while the North East accounted for 60% of the total, said the running mate of the APC presidential candidate is from the North East and the engagement should be about what this ticket would do to get these Nigerian children back to school, among other things.

“The APC candidate’s running mate is from the Northeast. What will this banknote do to bring these Nigerian children back to school? What will this post do to put an end to the despicable and shameful situation in which the political class has, over the years, weaponized the poverty and illiteracy of a population and used it to perpetuate themselves in power?

“What are their backgrounds? What have they done in the past to solve these problems? This is the root of the unrest in the North, a human development crisis, the consequence that Nigerians, Christians and Muslims alike face today,” he said.

Bakare said these were issues that needed to be brought before the ticket and before every party and presidential candidate, insisting that now was the time to move the conversation from politics to governance and to a new Nigeria of everyone’s dream.

“As we advocate for balanced political representation, the most important issues should be the harsh realities of underdevelopment, not just in the North, but across the country. Peace is the foundation of growth and prosperity, and until we learn to execute true justice and show mercy and compassion to each of his brother.

“The peace we yearn for in this country may continue to elude us. As the standard-bearers of the message of the new Nigeria, we dream of a nation in which every Nigerian will be judged, not on their ethnicity, political orientation, regional affiliation or religious beliefs, but on the content of their temper.

“We dream of a Nigeria where the political mantra will no longer be ’emi lo kan’ or ‘awa lo kan’ but ‘Nigeria lo kan’.

Bakare said he chose to remain the bridge between Nigeria’s past, present and future, and the galvanizing force that unites all citizens around the ideal of a new Nigeria, regardless of party. of the country they come from, which political party they are pitching their tent. with, or how they choose to worship God, recalled that Northern Nigeria had its political foundation based on the principles of religious inclusion and harmony, noting that this value system of religious neutrality and inclusiveness played out when military forces in northern Nigeria seized power in the 1966 counter-coup.

“We chose to do this because we believe that building the new Nigeria is the call for all Nigerians worth their salt. In keeping with this philosophy, in addressing the complex issues of nation-building, our position has always been in favor of statesmanship.

“On the difficult path of nation-building, statesmanship demands that leaders consider the mood of the nation in decision-making unless, of course, the motivation of those leaders fails. neither statesmanship nor nation building, but raw politics.

“Northern Nigeria had its political foundation built on the principles of inclusion and religious harmony. This value system of religious neutrality and inclusion manifested itself when military forces in northern Nigeria seized power in the 1966 counter-coup.

“The military had the confidence to leave the nation in the care of a Christian from a northern ethnic minority group. General Yakubu Gowon would go on to rule Nigeria for nine years keeping Nigeria in the midst of a civil war,” he said.

“This moment calls on every Nigerian, North, South, East and West, to renew their commitment to the nation, building on what worked in the days of our founding fathers, while learning from their mistakes and imperfections as we build a more perfect union,” he added.

“I challenge the political class not to sacrifice nationality on the altar of political expediency but to demonstrate, as candidates, that they can unify the nation as president.

“Now is the time to show maturity in decision-making and give every Nigerian a sense of belonging. Now is the time to become statesmen and women, caring for the next generation, not just politicians, consumed by the upcoming elections,” he added.

The cleric, while further calling on his fellow Christian leaders to address the issue in question and the broader context of the 2023 elections with civility, clarity and with continued hope in the possibilities of a united Nigeria and a new Nigeria that works for every Nigerian, Christians as well as Muslims, stressed that nation, rather than division, must be the goal of every engagement.

It was just as he emphatically noted that what was happening today was the price “we must pay for the church’s years of failure to strategically participate in the political process.”

“The antagonism that has been opposed to some of us who have ventured from the pulpit to the podium, even among our fellow Christian leaders, has always been an indicator that a day would come when the Church would face a revival brutal consequences of passivity, apathy, non-participation, and an anachronistic adherence to the Aaronic priesthood, especially long after the originator and finisher of our faith has moved on to the Melchizedek priesthood.

“Not to admit it would be hypocrisy. Going forward, before 2023, we must learn from our mistakes,” he said.