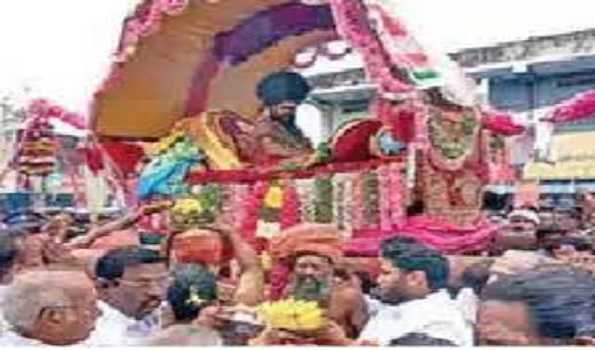 Mayiladuthurai (Tamil Nadu), May 23 (UNI) ‘Pattina Pravesam’, an age-old customary practice of carrying the Pontiff of Dharmapuram Adheenam (Mutt) on a palanquin by devotees on their shoulders took place with religious fervor here late on Sunday.

Thousands of devotees from various parts of the state gathered at Dharmapuram to witness the event.

The 27th Guru Maha Sannidhanam (Pontiff) Sri La Sri Masilamani Desiga Gnanasambandha Paramacharya Swamigal was carried on the decorated palaquin in a procession through the four ‘Mada streets’ around the Shaivite pooch, amid a musical ensemble traditional.

Seers from various Saivite pooches across Tamil Nadu and others besides BJP State Chairman K.Annamalai participated in the colorful event.

Dharmapuram wore a festive look in preparation for the ritual procession. The entire pooch was illuminated with colored lights.

Large numbers of police have been deployed to provide security following threats of protest from fringe groups.

Pattina Pravesam is held annually at Dharmapuram Adheenam, as part of the 10-day celebrations in memory of Guru Gnanasambandar, who founded the Mutt in the 16th century to spread the ideology of Saiva Siddhanta.

The event sparked controversy earlier this month, after Divisional Revenue Officer Mayiladuthurai issued an order banning the ritual, citing violation of human rights under Article 23 of the Constitution, after that the Dravida Kazhagam party opposed it.

The ban order sparked a political storm in the state with opposition AIADMK, BJP, DMDK, RSS and pro-Hindu outfit condemned the ruling DMK government and demanded to revoke the ban, while the CPM, CPI, VCK and Naam Tamilar Kanchi and others demanded that the ban on events like Pattina Pravesam continue.

Pontiffs and representatives of various Mutts called Chief Minister M.K. Stalin and urged him to lift the ban, after which the government rescinded its banning order.

Religious and racial tolerance starts with all of us | Blogs