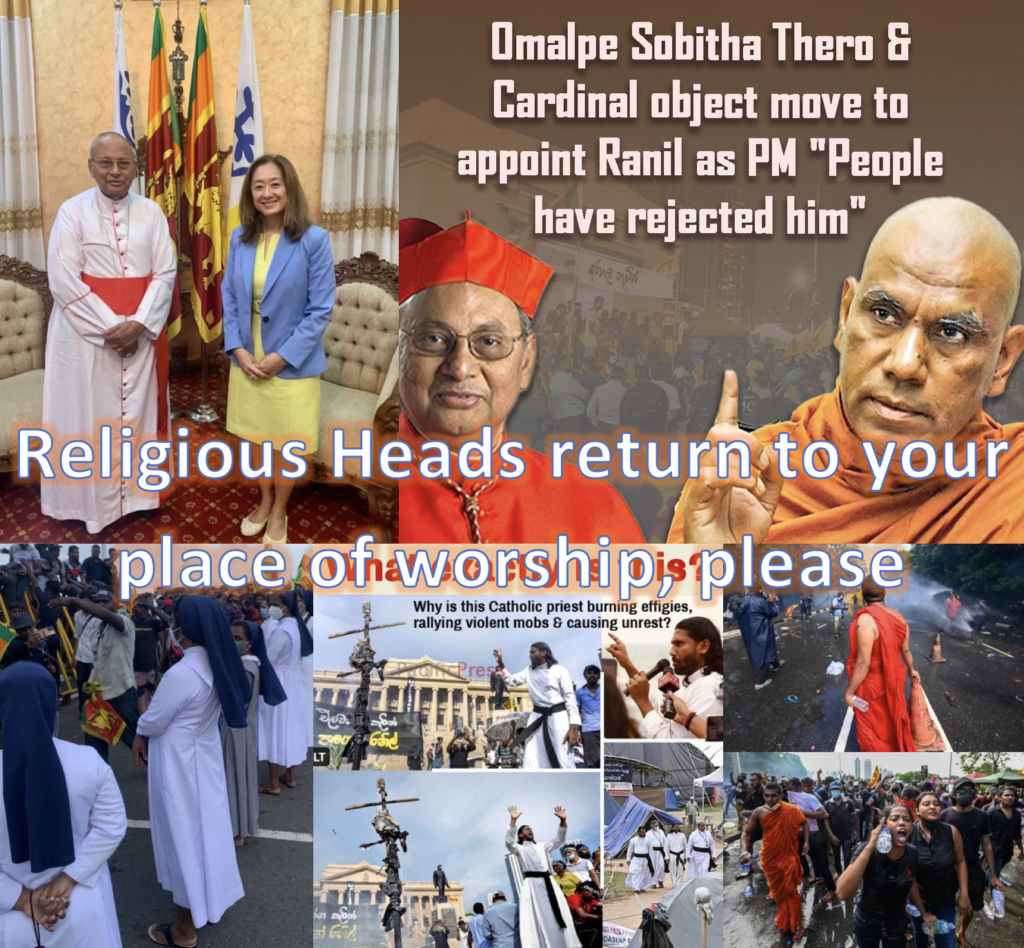 Sri Lanka must restrict religious leaders to their place of worship and away from politics
Posted on August 1, 2022

During ancient times in Sri Lanka, kings went for guidance as well as blessings from the Sangha. The kings went to the Sangha – the Sangha did not come to the king. The role of the Maha Sangha was advisory. The reverse is happening now. In the Western Hemisphere, the Church has played a key role in governance. Post-colonial rule, governance transferred to the state and its institutes. Religions were confined to their places of worship. However, in recent times we are witnessing an undesirable increase in interference in governance by religious bodies, sometimes in conflict with state governance. Currently we see religious leaders organizing demonstrations, processions, holding signs, inciting hatred, animosity and divisions between communities and making the country vulnerable to attack due to the negative publicity they generate locally and internationally through their conduct. This conduct has gone too far and beyond the levels of acceptability. The government must take steps to prevent all religious leaders from staying within their religious boundaries and not getting involved in politics unless the leaders come to them for advice.

Religious leaders of all faiths should be ashamed that if people’s values ​​have deteriorated, they are partly to blame because instead of bringing people closer to spirituality, they are busy inciting hatred in their minds.

As a result, people lose trust and respect towards religious leaders and this is not a very good sign and needs to be addressed.

Due to the conduct of religious leaders, people of these faiths have become disoriented and disillusioned and alienated, resulting in a society that has also lost the need to be spiritually awakened.

Leave the politics to the politicians – leave the protests to the demonstrators – … suggest that the religious leaders stick to what their robes tell them to do.


Disclaimer: The comments contained in this website are solely personal reflections and do not necessarily reflect the views of LankaWeb. LankaWeb.com offers the content of this website free of charge, but does not necessarily endorse the views and opinions expressed therein. Neither LankaWeb nor the individual authors of any material on this website accepts responsibility for any loss or damage, howsoever caused (including negligence), which you may suffer directly or indirectly arising from your use or of your reliance on the information contained on or accessible through this website. All views and opinions presented in this article are solely those of the internet user and do not necessarily represent those of LankaWeb.com.

This entry was posted on Monday August 1st, 2022. You can follow any responses to this entry through the RSS 2.0 feed. You can skip to the end and leave a response.